Material: 9 layer  Chinese maple or customized; Size: can be customized;T echnology: Cold-Press operation or hot-press; Graphics: we can heat transfer print your graphics on the decks. 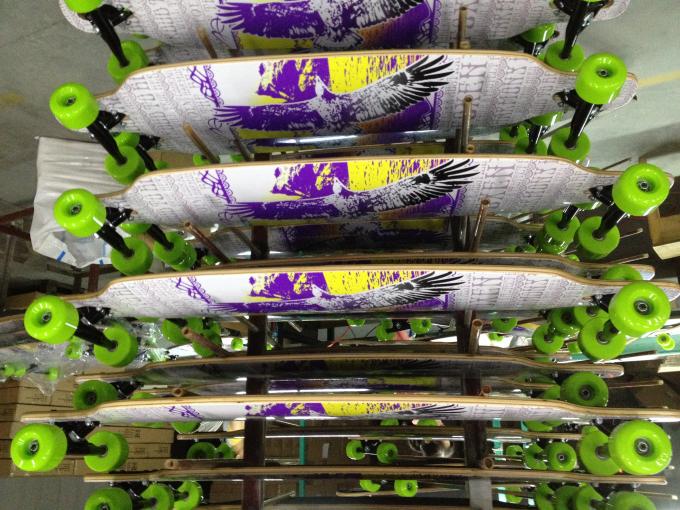 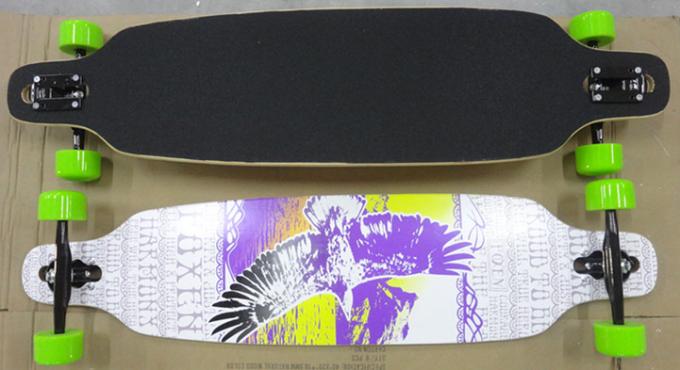 Professional knowledge and skills of the slide plate:

1, normal posture (normal): the left foot in front of the regular position with the right foot in the front goofy posture.

2, inverted slip posture (fakie): that is, in the direction of the regular position to the end of the slide.

3, anti (switch): that is in the normal position and the opposite posture (if you are the original regular for the goofy) to do a variety of action.

In 4, Nollie: pose - the anti foot position and the inverted slip is a combination of Nollie posture.

5, Mongo: posture - this is a very awkward position, former

ly the sliding foot and rear foot placed on the plate of a sliding way.

6 and twist in the air (body varial): this action is very simple, namely the body jump to air the swivel 180 degrees to fall on the plate, generally with other actions such as kick with.

7, Ollie: that is, with the feet off the board. This movement is to enter the free world of the threshold, I think it is to make a lot of people on the road to the road. (Ollie Ollie: the origins of this action by America skaters Allan Gelfand first, and his nickname was "ollie". In 1979, 15 year old Allan exercises in the Florida Florida and dock, a skateboard park, in a bowl shaped swimming pool, he found myself actually need not the hand grasping plate and strip vacated. His companion called the action "ollie". You may think that the United States will not be in the United States in the 79 years of the United States to appear this action, right? Allan and later became the strength of bones of the dead team members, but he only made two Pro will switch to engage the car, but the creation of meaning is self-evident.

8, jump (frontside 180 Ollie): namely, Ollie, in man and in rising process, belt plate to the body back side swivel 180 degrees after landing.

10, sliding rear wheel (manual): that is, to slide and maintain a certain speed, after the foot plate tail lifted the front wheel (the rear of the plate is not the ground) only after two rounds of sliding. Manual Ollie then do this action after ollie.

11, Ollie (manual nose): with a similar action similar to the previous two rounds of the balance nose manual Ollie refers to the act of doing this.

12, Daoban (pop shoveit): this point to the inner wall. Standing position as the Ollie, rear force plate under the tail and feet before the dial plate so that the rotation, followed by the body to jump into the air, patiently waiting for the board turned 180 degrees, the body back to board, genuflect to buffer.

13, tifan (kickflip): This is the basic action type. Learning this action, you must practice ollie. rear foot placed on the tail board (sole placed in the center of the end plate center), forefoot arranged on the front axle adjacent screw, and plate edges roughly 45 degrees feet with the best plate is placed on the edge of the outside. Like Ollie, rear plate with plate to fight,. The difference is to head in the front plate toes gently forward lateral play, while the body leapt into the air. Wait in turn 360 degrees, after the foot board, and then stand back to the plate, bent to buffer.

14, heel turn (Heelflip): similar to the last action. But in front of the station with different poses: toe should be arranged on the front axle screw position and to feel comfortable is appropriate, toe is located at the edge of the plate. Ollie after the foot heel forward to the inside of the foot, the attention of the force is not too large, while the body left the slide, the plate is 360 degrees vertical rotation after the foot plate.

15, cabalero: this action by cabalaro Steve pioneered the name. Specific approach: to the inverted slip sliding posture, after foot fierce pedal tail, the front as the Ollie to strip, and plate and inward rotate 360 degrees. This action has a certain degree of difficulty, the key is to quickly.

16, no comply: hand grab rebounds, with appropriate speed toward the obstacle, on wheels will be close to obstacles, front foot off the board, while the rear foot pedal tail, feet trying to set foot on the obstacles, hand to catch a head plate. Shangbu the action is completed, not stop the action, forefoot to jumped back to the board, front foot falls near the front axle, ready to fall, knees balance.

17 and done: rear foot placed on the tail plate, front foot slightly in front; rear force plate tail, and the allocation of the action, the front such as kick like the rotary plate, waiting for the plate in between your legs rotate 360 degrees, after the foot connecting plate, bend your knees to buffer.

18, Nollie: this action is based on the basis of Ollie, the front plate is positioned on the head and foot board is arranged on the central and forefoot push plate head and rear pulling up, feeling board has to the highest point, board leveled, bend your knees to buffer.

19, outside jump 5050: jump 5050 practice similar, the only body to different. At small angles close to obstacles, jump in and make the plate down to the obstacles, two bridge at this time were located in the barrier, forefoot arranged on the front axle, rear foot placed on the rear axle and the tail grab, pay attention to don't be convulsed with laughter. Because of the inertia plate will glide, want to fall or slide at the end of the tail light plate, like the manual landing, after falling note on protection.

20, big spin: fast glide, hind in the tail of the board, front board is arranged on the central slightly outside 8 words, like the popshuvit. Do jump inside 180 at the same time, the rear dial plate to rotate, in the plate transverse rotation, using the front to avoid turning plate, plate to rotate 360 degrees to be, body has also been turned 180. The body fell to the plate, knee balance.

21, slip and fall over board 360: to slide down sliding posture and foot position as general turning plate 360, tail grab them, tumbler like to do, but forefoot like kicked kicking out (the not too much), body leaps, stay in facing up, the back foot plate on.